Join Dr. John Straube as he dives into the anatomy and science behind rainscreen wall systems, and what a rainscreen system requires above all else to be effective.

He also details how DELTA®-DRY’s unique application solves moisture problems in the most common wall types, especially absorbent claddings like stucco or manufactured stone. Below you will find a summarized version of the key learnings from Dr. Straube’s presentation.

What is a rainscreen wall system? 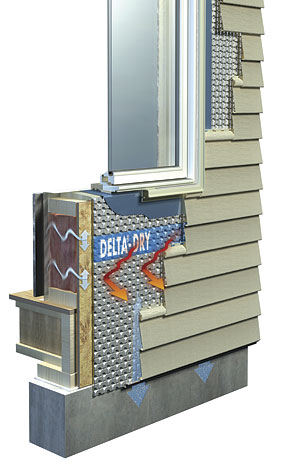 A rainscreen system is the key component in any well-designed drainage system, especially when it comes to areas with heavy rain, the number-one cause of moisture problems above grade. Without proper ventilation and drainage, moisture can accumulate between the water-resistive barrier (WRB) and cladding.

The basics of moisture management

When dealing with moisture control in building enclosure assemblies, the biggest form of moisture in the above-grade situation is rainfall. 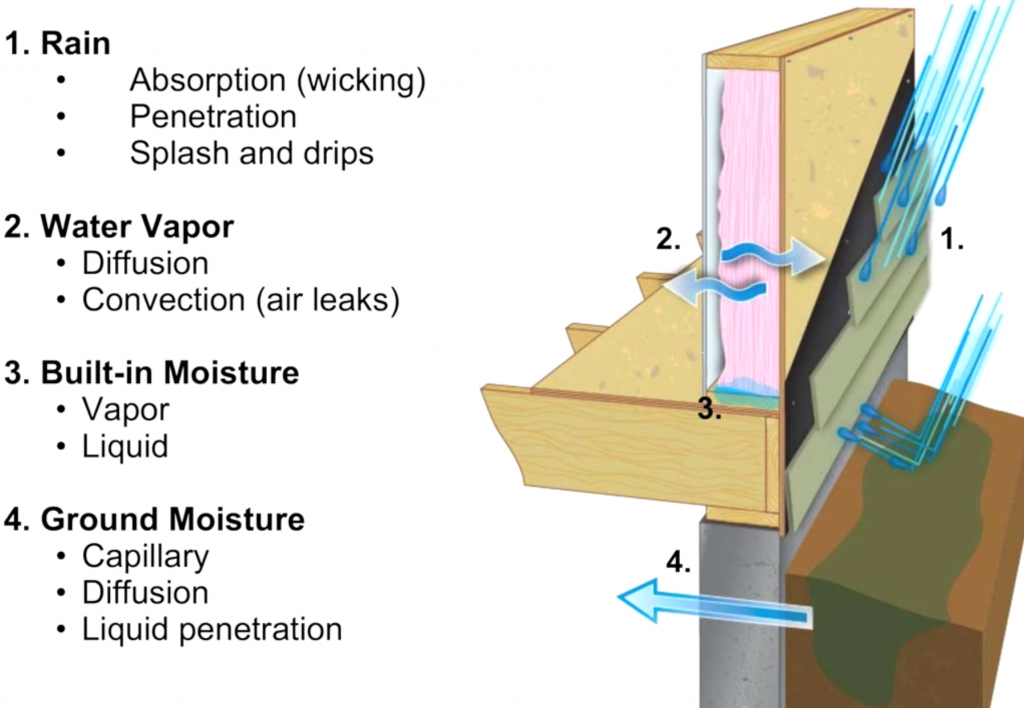 That means we have to consider things like the outdoor climate, indoor conditions, the various layers in the assembly, and their ability to store and tolerate moisture over time.

What are some ways moisture can be removed?

Older buildings typically allow water to wick through solid masonry and other moisture-tolerant materials to the surface of the interior or exterior, where it evaporates.

With frame systems, in the wetted inside voids in framing cavities and such, the water can evaporate, and it will then diffuse or move by convection (air movement) from the wet materials to the dry materials, and eventually to the outside.

In terms of dealing with rainwater penetration, the most effective method for removing the most amount of water in the shortest amount of time would be drainage. This is just gravity-driven drainage of water down and then eventually out.

We also need to consider ventilation and the air movement behind cladding over sheathing as a powerful mechanism, because even though drainage is effective, once drainage stops, it still leaves droplets on surfaces and materials soaking wet. Drainage won’t dry water out of wetted materials – that has to be done by other mechanisms. And ventilation can help with that.

Nowadays, ‘drained approaches’ are referred to as rainscreens.

The five components of an effective rainscreen wall system

Functional rainscreen systems must have, above all else, excellent drainage. Drainage is key in most wall design systems today. 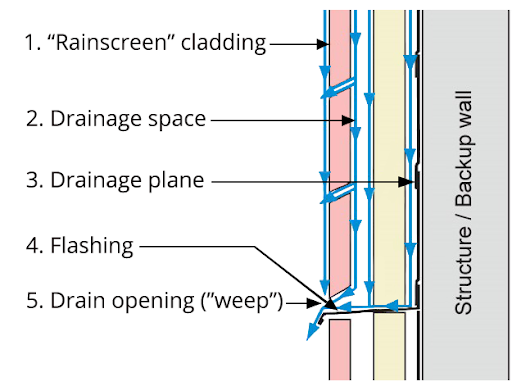 The five components of a rainscreen system include:

We’ve started adding components to our building enclosure assemblies, such as exterior continuous insulation. This actually helps with rainwater management, as we now have several layers that we can drain water along.

But this brings up some other categorizations worth mentioning: 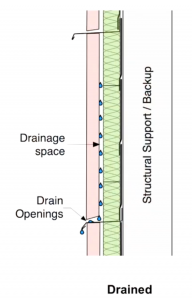 Some wall systems are just drained; there’s not a gap big enough to allow any meaningful amount of venting. 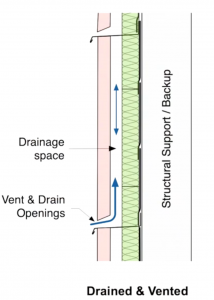 There are drained and vented systems; there may be an air gap, but there’s only a small number of vent openings along the bottom. 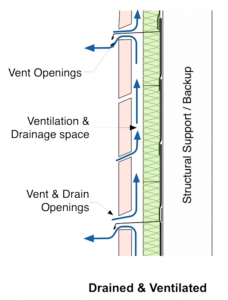 Finally, there’s the drained and ventilated system; these have a larger air gap (¼ inch and up), but critically have vent openings that are more widely distributed, typically at the top and bottom of the air gap to encourage this type of air movement we’re looking for behind the cladding.

Even if you have superior drainage, rainwater can still cause walls to fail. For example, if you use moisture-storage cladding like stucco or adhered masonry veneers, rainwater on the wall will be first absorbed into these porous materials.

That water doesn’t drain away. It’s held in there by capillary forces, no matter how large of a gap you provide. This stored moisture can end up damaging your framing and sheathing. It’s a process called inward vapor drive.

This is how inward vapor drive occurs:

One of the solutions – an innovative approach to be sure – is to use a plastic-based, dimple sheet.

Carefully-designed dimples on the front to allow drainage, and the dimple shape on the back allows ventilation drying, meaning we can actually encourage water to leave by drainage – but resist any inward vapor drives from occurring. 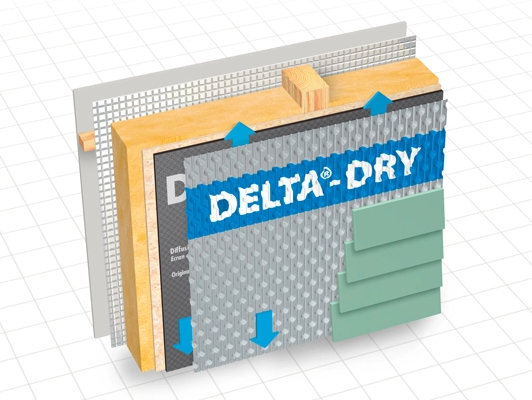 Dr. Straube and his team examined DELTA®-DRY from a research perspective to quantitatively assess drainage capacity.

At the University of Waterloo, over the past 20 years, Dr. Straube and team have developed techniques to measure the amount of water that drains, how quickly, and how much it stores, in a very quantitative way.

This is how they do it.

Dr. Straube and team hang full-scale wall samples from a load cell so that they can measure to the nearest fraction of an ounce or gram the amount of water involved on a second-by-second basis. 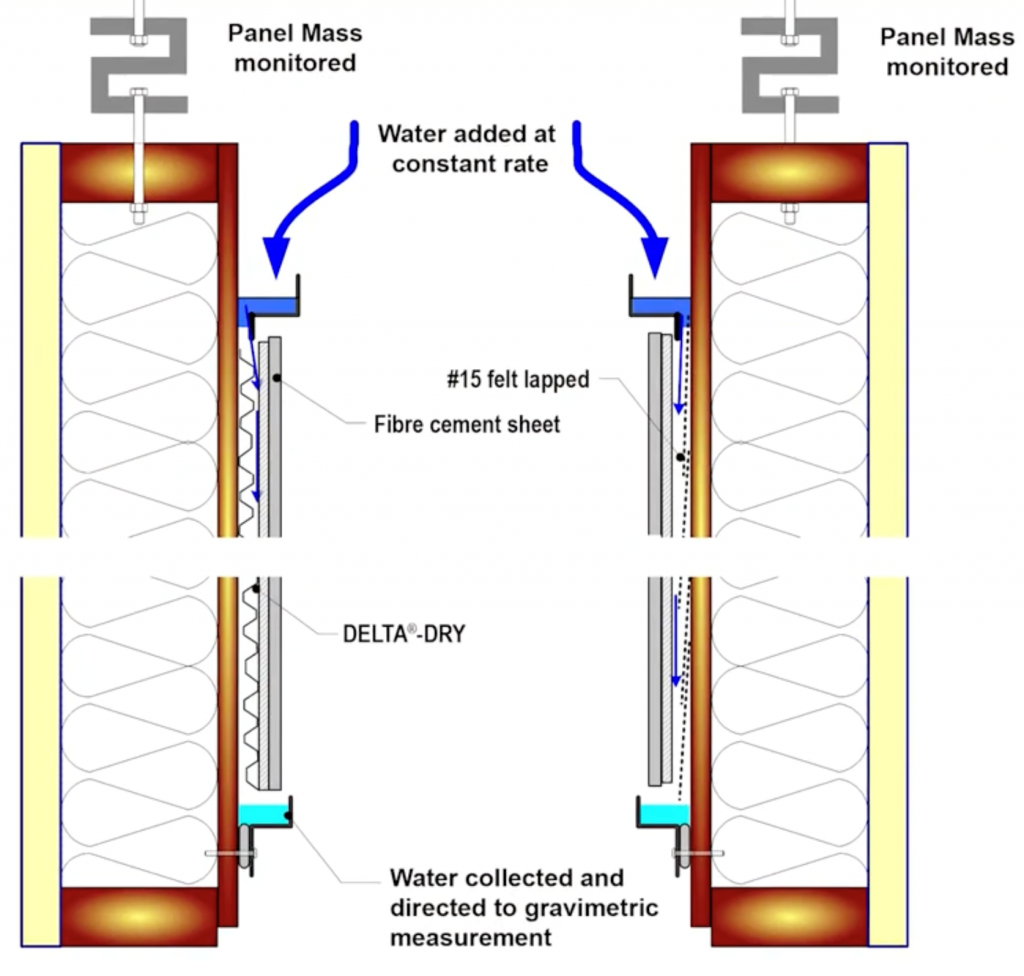 They often have to apply a balance beam approach. They put weights to offset the dry weight of the test assembly, so that the load cell can pick up the relatively small amount of change in mass, which is a result of water being poured into a simulated leak or crack. They then gauge where that water drains out, how quickly, and how much is stored.

But now for the good stuff – the results.

The results showed DELTA®-DRY drained exceptionally well – but the real magic comes when it’s applied behind stucco or adhered veneer mass storage systems. These systems are highly common moisture storing claddings that are susceptible to inward vapor drives. Putting these types of claddings over DELTA®-DRY, there’s an adhered mesh fabric that stops the mortar from oozing into the drainage gap, guaranteeing a continued drainage gap.

Here is how it looks fully installed: 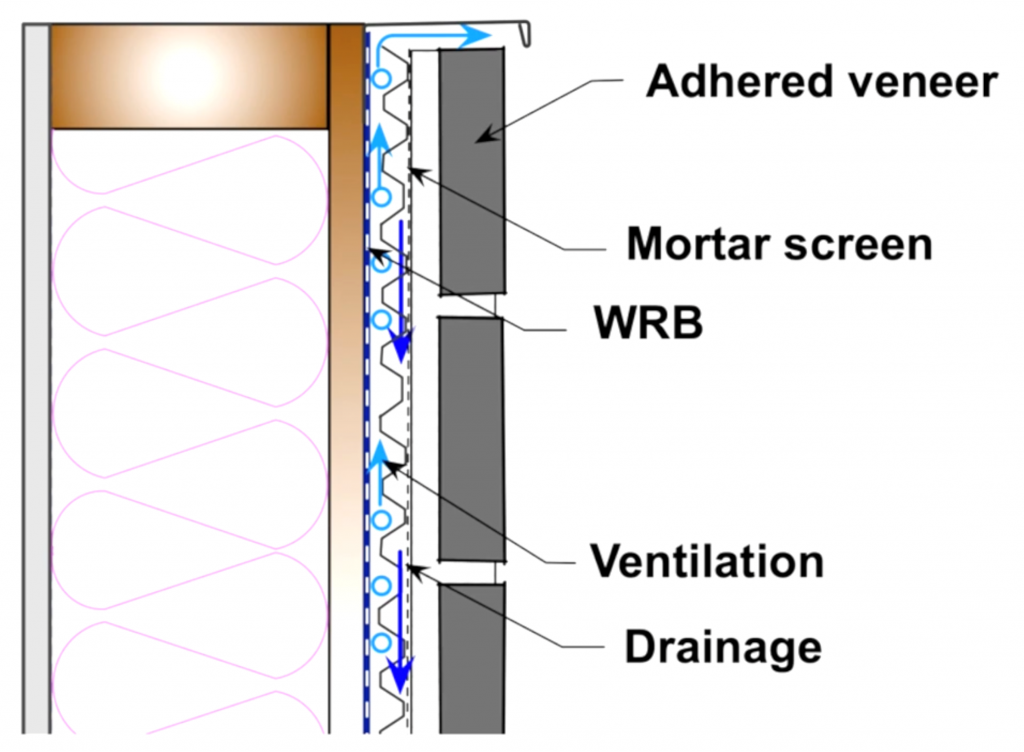 The dimple sheet does allow drainage in the gap in front of the sheet, but also allows ventilation of the gap behind the sheet. This means you can use an impermeable plastic material to intercept and block inward vapor drive, while still allowing water vapor inside the wall assembly to ventilate to the outside and ensure drying continues as normal.

Demonstrating and measuring the ability of DELTA-DRY to resist both inward vapor drives and allow outward drying, Dr. Straube used the only technique that can be definitive, which is a field exposure system.

Essentially, you build a wall, with normal scale and traits, and you measure the moisture content and humidity within the assembly to show that it can work. And more importantly, in these types of systems, since there’s not really an absolute answer, we often have to use a comparator wall.

So, they built a test wall system at RDH’s test hut: 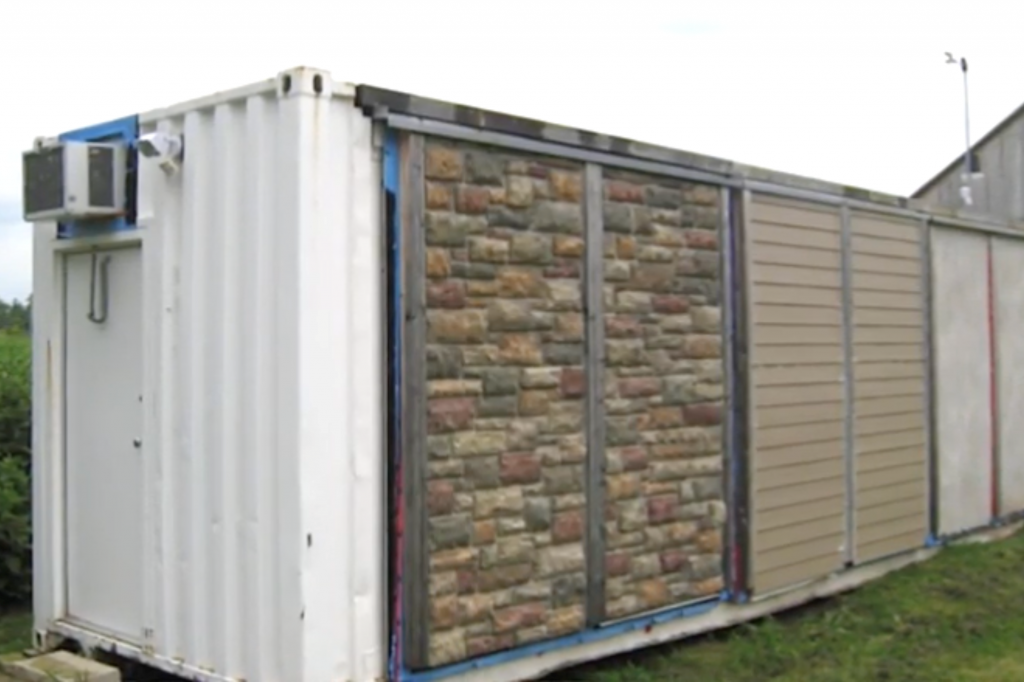 You can see the adhered veneer on the left hand side installed on the test hut; the image on the left is the building with two layers of building paper, and on the right is with DELTA®-DRY.

Over a period of 2 years, each wall was monitored, although the central 16 months is shown on a plot here: 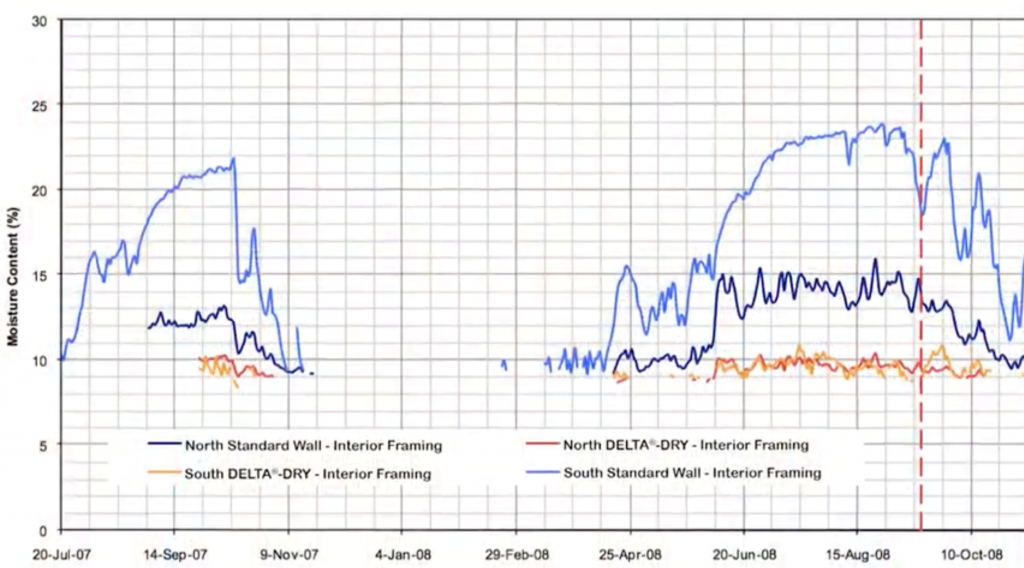 The results show that the moisture content in the two building paper solution rose to a worrisome territory. This was evident in the interior framing, where some condensation is expected. The interior framing isn’t the wettest part of the wall, but it is a part of the wall that can be measured reliably. (The reason that there are no lines in a section is simply because the walls were too dry to give a reading.)

The orange and red lines are showing the moisture content of the DELTA®-DRY system; the light blue and the dark blue are the industry standard of two sheets of building paper.

After 24 months, the wall was taken apart, and as you can see, the darker colour on the left hand side has incipient mold growth behind the double building paper system.

Learn more about the DELTA®-DRY moisture management system, or if you’re using stucco and/or adhered stone veneer, check out DELTA®-DRY STUCCO & STONE, which is made specifically for absorptive claddings. 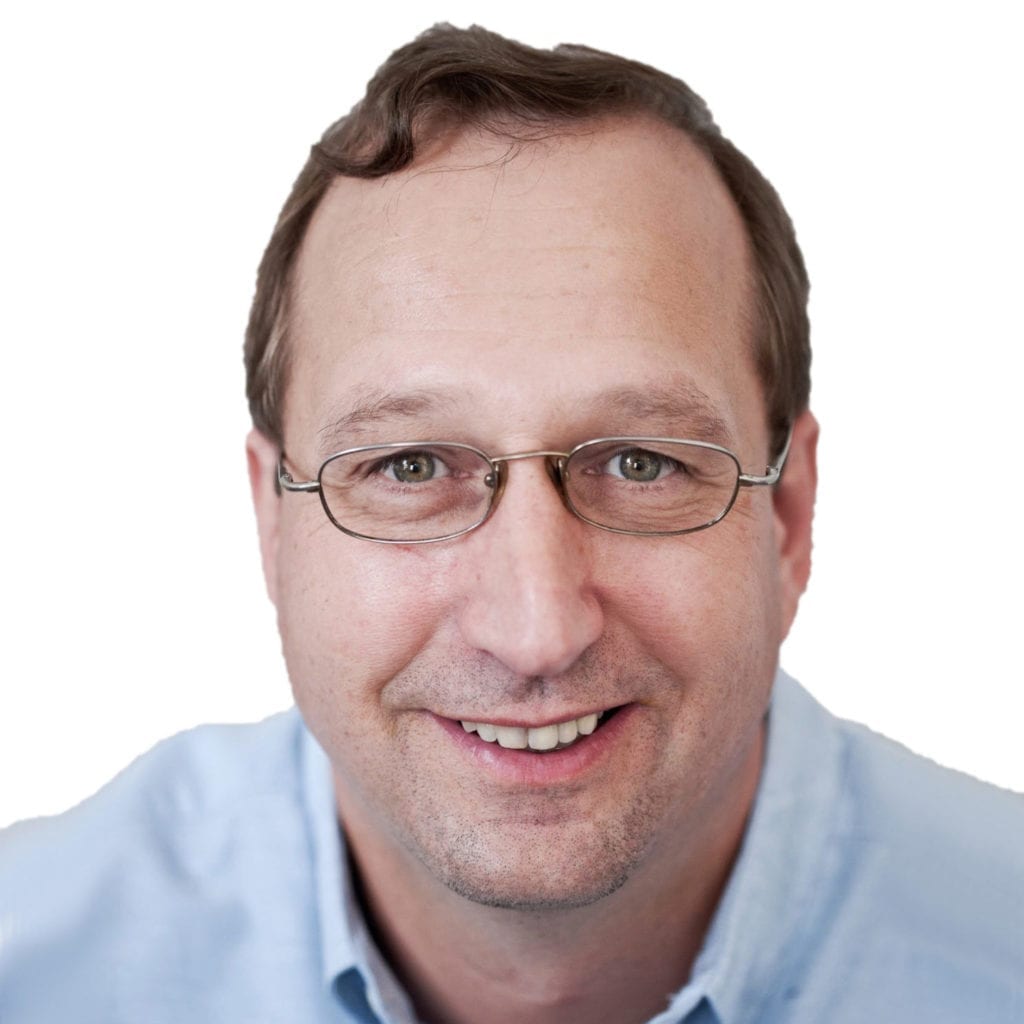 John Straube, Ph.D., P.Eng., is a principal at RDH Building Science Inc., where he heads forensic investigations and leads research projects in the areas of low-energy building design, building enclosure performance, hygrothermal analysis, and field monitoring of wall assemblies. He is also a prolific writer and a noted public speaker.
In addition to his work with RDH, Dr. Straube is a cross-appointed faculty member in the School of Architecture and the Department of Civil and Environmental Engineering at the University of Waterloo. Dr. Straube’s leadership as a building scientist and an educator has been recognized with multiple awards, including the Lifetime Achievement Award in Building Science Education from the National Consortium of Housing Research Centers (NCHRC) and the Professional Leadership Award from the Northeast Sustainable Energy Association (NESEA). Get the full scope of Dr. Straube’s work, awards, and contributions to the industry over at RDH.