Vapor Barriers vs. Vapor Retarders: What Makes them Different?

While similar in name, there are critical differences builders, architects and designers need to understand between vapor barriers vs. vapor retarders.

Here’s what makes them unique, and why you might use them in your builds.

All building materials, no matter how solid, allow water vapor to pass (or diffuse) through. It may be at a very fast rate or an excruciatingly slow rate, but water vapor passes nonetheless. The rate at which water vapor diffuses through a given material is referred to as the permeability, or its permeance.

Materials used to create vapor barriers or vapor retarders are given a rating system based on their permeability and permeance. The rating is known as a perm.

A low perm rating means that water vapor has a difficult time getting through the material, making it an effective barrier. The higher the perm rating, the faster the rate at which water vapor passes through.

Builders, architects and designers often get confused over the difference between vapor barriers and vapor retarders. The definition of the differences is illustrated by Building Science Corporation:

Can a vapor barrier act as a Class-I vapor retarder?

Many building professionals and manufacturers use the term ‘vapor barrier’ to classify between a class-I vapor retarder and an impermeable material. Based on their perm rating, building products fall into one of three classes of vapor retarder.

According to the U.S. Department of Energy, the vapor retarder classifications are as follows: 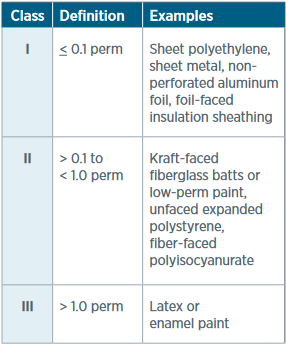 Although many areas of the country strictly follow the IRC definition of the differences between vapor barriers and vapor retarders, some areas of the United States still adhere to the International Energy Conservation Code (IECC), which states that a vapor retarder is a material that has a permeance of 1 perm or less and does not acknowledge vapor barriers at all. The definition clearly includes vapor-retarding paint, polyethylene sheeting, aluminum foil, and kraft paper facing.

Even though different areas of the country follow varying guidelines, there remains a general consensus that class I vapor retarders are generally considered to be vapor barriers and are normally referred to as such instead of vapor retarders. The accepted nationwide definition of a vapor barrier remains that it is not a permeable material, unlike a vapor retarder, which effectively stops the movement of water vapor.

Any time a vapor barrier or a vapor retarder must be used, the climate zone where the product is being installed is the deciding factor.

Various climates require various moisture control considerations. In areas of the United States with exceptionally warm and humid climates, it is recommended to install a vapor retarding layer near the exterior side of wall assemblies, according to the North American Insulation Manufacturers Association.

Here’s a chart from our DELTA®-VENT SA Technical Guide with the details: 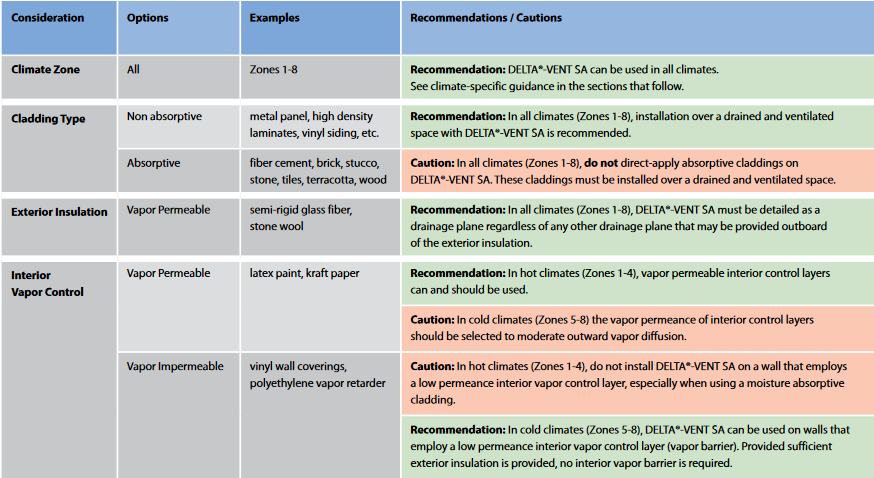 There is a lot to consider when making this decision, so make sure to educate yourself on what matters most for your specific build, based on climate, location, and other contributing factors. This chart (or the technical guide above) is a helpful tool to assist with your next project.

Learn more about vapor barriers at the DELTA® Academy